A Layer of Darkness 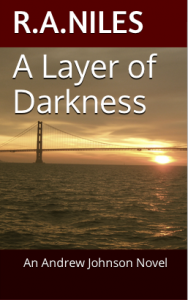 Available now ! at Amazon.com  or Click on the Book cover above

A layer of Darkness is a mystery and political intrigue thriller set in San Francisco. It is 1945 during the closing months of World War II when British statesman, Nigel Cunningham lies dead, smoldering in the fetal position on a cold garage floor. As the crime scene begins to reveal numerous irregularities, police inspector Andrew Johnson senses a twisted case of appearances  and realities and a frightening truth ultimately revealed by the corpse at his feet

I wrote it from the viewpoint of  Inspector  Johnson, who we will see more from in upcoming stories, the next of which is entitled China Basin.

A layer of Darkness opens in the garage of a small house in San Francisco’s sunset district.

His favorite bar La Rocca’s corner is at the corner of Columbus and Taylor. You can go there today and it still is essentially the same. The photos in the sidebar are current . They’ve just been made to look old.

Below is the opening scene:

They said the cleaning lady had run out of the house, screaming into the street. As I looked down at the victim, curled up on that cement floor, a trickle of vomit burned as it rose up my throat. My eyes watered as I swallowed it back and looked down so no one would notice. I wanted to run out of the house and maybe scream too.

Hennessy, a barrel-chested veteran patrolman with a big red mustache, had taken my partner and me into the garage and was giving us a rundown on what he knew so far. When I walked in the front door, the first thing I noticed was the smell. Not Hennessy—he always smelled like booze. And that morning, so did I. I was hungover.

No, it was the house. It reminded me of a bad steak joint with a sickly sweet, smoky but also acrid smell that hung in the air like a heavy blanket. It smelled like Merv’s Beefeater’s House, a seamy steak and gin joint. Merv was a rummy who also ran used-up hookers after the whorehouses had kicked them out. He burned the steaks, used the aging party girls, served bathtub gin, and never cleaned the place. I didn’t go there too often, but the steaks were cheap.

I felt like hell until I saw the body.

Then I felt worse.

The victim was burned—charred black with small snakes of smoke still rising from the body. First glance, he had been lit on fire on that one-car garage floor and left to smell himself cooking. Searing. His face was skull-like but burned smooth and black. The eyes, like raisins, stared across the floor, like a demon.

A photographer’s flashbulb fired and popped.